Ukutula, an industrial-sized predator facility outside Johannesburg, South Africa, has been in the firing line from conservationists and animal activists for over a decade. The place runs one of the most sophisticated lion cub petting, voluntourism and trading operations, and on countless occasions they have been exposed for selling their lions on to other operators once they are no longer good for their commercial operations. 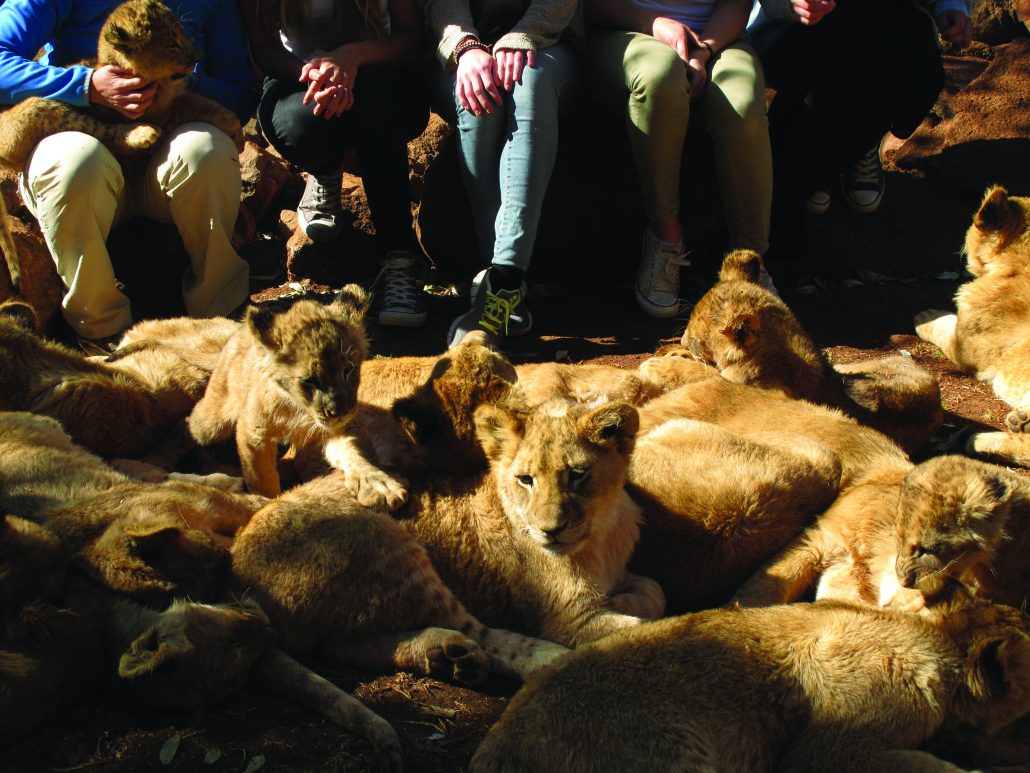 Where do these lion cubs come from and where do they end up? Photo credit: Ian Michler

The explosive documentary Blood Lions has exposed how the predator industry operates with scenes shot at Ukutula clearly showing as many as 27 lions cubs being handled by visitors and volunteers. The film asks the leading question “where do these cubs come from and where do they go”?

Ian Michler, lead role in the documentary states; “There is absolutely no conservation value whatsoever to breeding lions in captivity under these conditions, and especially so if they have been hand reared. These lions can never be released to the wild and volunteers are being conned into believing they are making a contribution to securing the future of lions.”

Volunteers are paying up to US$1000 a week for the experience of handling cubs and Ukutula can have up to 25 volunteers at any given time, clearly a significant money spinner for the operation.

Australian Federal MP Jason Wood was so shocked at the damning evidence Donalea Patman, Founder of For the Love of Wildlife took to him that he worked with then Minister for Environment, Greg Hunt to do something as he felt canned hunting was morally reprehensible. Minister Hunt created a global first by banning the importation of lion trophies and body parts, a courageous and visionary step with France and the Netherlands following Australia’s lead. The USA government has since also implemented far stricter laws for importing lion trophies from Africa.

Despite consultation with the Government and a screening of Blood Lions in Parliament, a private zoo in New South Wales has been able to import cubs from Ukutula in South Africa. 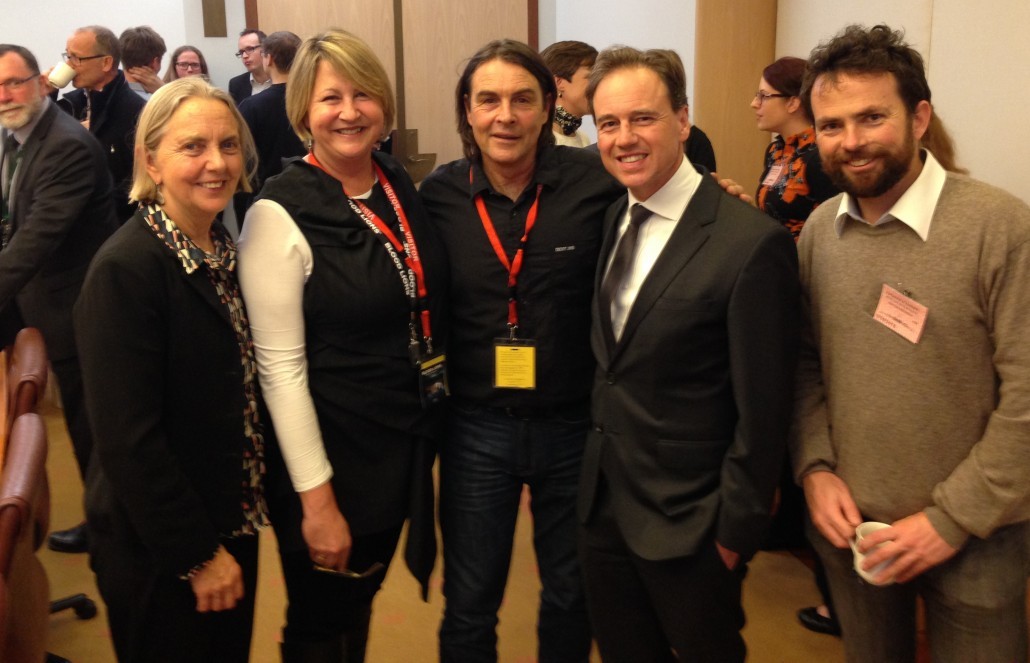 Ukutula has implemented a system of tracking their lions to assure buyers that they’re not destined for the canned hunting industry but given the information is confidential, you have to question how effective this is.  In addition, not a single recognized lion ecologist or predator conservation agency is working with them.

Ms Patman states; “We do not need more lions (or any big cats) in Australia. There’s absolutely no conservation value and we’re supporting this unscrupulous business by allowing these imports.”

“The world is outraged over the brutality of canned hunting and we’re trying to educate the tourism industry and volunteer groups not to engage in exploitative animal encounters – cub petting and lion walking being part of the canned hunting cycle. We are sending mixed messages allowing these cubs into Australia but saying don’t do it in other countries.” 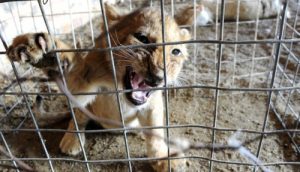 Billabong Zoo in Port Macquarie publicly states that it wishes to breed from these cubs. Are we not replicating the trend in South Africa which has been globally condemned  by conservation and animal welfare groups as purely exploitative practises?

“In order to import lions to Australia both the Australian authorities and the South African authorities have a strict permitting process to ensure the animals are sourced from a legitimate and licensed facility and to ensure they are going to be used for conservation purposes. In Australia lions are treated as a CITES 1 species, a higher level of protection than anywhere else in the world. This means that they can only be imported as part of a conservation breeding and education program. The Australia CITES office did research Ukutula and were satisfied that they were not part of the canned hunting industry – if they weren’t satisfied we would never have been granted our import permit. These cubs were also approved by the Zoo Aquarium Association to be accepted into the Australian breeding program for lions – this approval process included the scrutiny of, and acceptance by a number of individuals involved in this organisation. Secondly, Ukutula themselves insisted that Billabong Zoo become a member of EcoScan, a program which offers lifetime tracking of individual animals to ensure they are only used for ethical purposes and are not part of the hunting industry. Ukutula could not be a member of EcoScan if they hadn’t already proven themselves to not be part of the canned hunting industry. Thirdly our zoo vet personally visited Ukutula to inspect the lion cubs and the facility prior to the transfer, and returned with nothing but praise for the operators, the staff, the facility and the animals. The process for Billabong Zoo to import lion cubs has been a huge undertaking, and one that we have spent years bringing together. These animals and the sending facility, Ukutula have been researched and accepted by various government bodies and zoo industry officials. Throughout the entire process Billabong Zoo has remained transparent with the sourcing and importation of these animals, and at no time has any government or zoo official raised concerns with how these animals were sourced. The cubs, Milo and Misty have travelled and settled extremely well and we are so proud of the impact these little ambassadors have already had in raising awareness about the plight of the African Lion.”

“There is in fact only one piece of post-doctoral research (2012 study by Dr Luders and others) in the list of 14 links. The only research of substance appears to have been the improved felid semen collection study by Dr Luders and others that is not even lion specific. It involved a very small proportion of the Ukutula lions (7 out of an estimated 100).  It does seem clear to us that Ukutula is primarily a commercial lion breeding venture, not a research facility.” Chris Mercer, Campaign Against Canned Hunting.

We are calling on the Australian Government to show consistency. We cannot condemn South Africa’s predator farms and the cycle of exploitation and then allow cubs from those same operators to be shipped here. In addition, we call on the Australian public to refrain from visiting these places; think before you visit and know that handling a wild animal commits them to a lifetime of misery with no chance of being reintroduced to the wild. 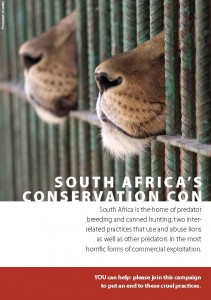 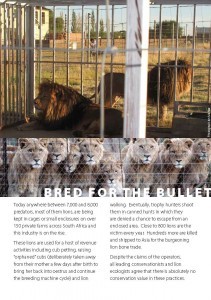 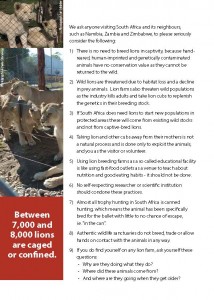 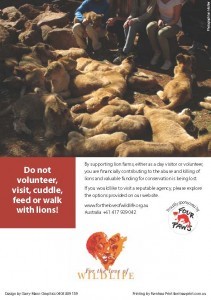 USA bans trophy imports of captive South African lions Become a member and help save our iconic species
Scroll to top
This website uses cookies to improve your experience. If you continue using the site we'll assume you're ok with this.Accept Read More
Privacy & Cookies Policy